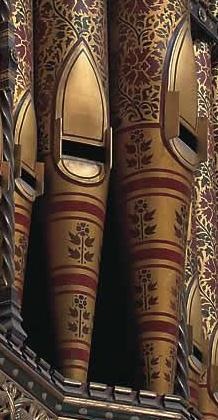 Our organ humidification system was developed to offset the abnormal drying of the instrument”s fabric, which can result from the heating of the building, especially during the cold, dry period of the year. The majority of organs were of course built for very different conditions.

Organs which were built to successfully with stand the variations normally met with within the protection of a good and usually massive building with a certain amount of heating in cold weather, may suddenly give very serious trouble when in cold weather the temperature is raised to a fully comfortable level of 16° C or so. The great effect on the humidity of the air of raising its temperature when it is cold and dry in not generally appreciated.

To offset this drying in a building as a whole would often present great difficulty and expense which is not called for on the grounds of comfort. This is especially true in places of worship or concert halls, because the effect of a large gathering of human bodies raises the humidity temporarily. There is therefore the need for something on a smaller scale, which will limit the harmful effects on the organ to a degree that it can satisfactorily withstand.

Our system works on the principal of moisture being taken into the air by natural evaporation as the air passes through the plant. An electric motor is used to drive an impeller that draws air into the upper section of the equipment. At this point a variable amount of the air can be directed immediately to the discharge without any increase in its relative humidity level. Air that does not pass directly to the discharge enters the lower chamber. At this point it is driven through the evaporation media, which is kept moist by means of a water flinger that is also driven by the electric motor. From here it passes out of the equipment, mixing along the way with any air that was allowed to bypass the evaporation process. A sensitive float valve is used to regulate the small quantity of water that the system requires at any one time. To prevent the escape of organ wind through the humidifier a non-return flap is fitted to all outlets, which are designed to close when the wind system is pressurised by the organ blowers.

We regret that, due to product liability insurance restrictions, we are no longer able to supply to North America or Canada.